The reason why starburst is so popular is because it’s easy to play and its' action packed pure spinning with extra features which are designed to help you win more. Also, you’ll be mesmerised by the sparkling jewels and the arcade colours of Starbursts’ graphics.

How to Play Starburst Slot

As with most Netent slots, Starburst Slot offers a high quality structure and graphic design. Starburst Slot is designed with 5-reels, 3-rows, and offers Win Both Ways pay line, which means that Starbursts' win lines run from left to right and also from right to left, which gives you the double chance to win some gold coins.

To get started, you need to choose the number of lines you want to bet on and also the coin size. You can do this at the bottom of the reels by going through the betting options. The minimum bet on Starburst slot id 10p, whereas the maximum is £100. It's a slot tht perfect for all types of players.

Set Starburst Slot up to the limits you prefer to play at and ones which are well within your own comfort zones and get spinning on Starburst! If you wish to play Starburst for free, you can either choose a recommended casino site below and click to play the 'demo' version of Starburst, however and much more fun,

You can choose top quality online casinos like LeoVegas Casino, and play for free but in real mode, as they offer 20 free spins on Starburst when you register a new player account.

There are some handy tips to consider when playing Starburst slot. Starburst has a house edge of 3.9%, which makes the Rtp is 96.1%! It's therefore considered a lower volatility slot meanning that  the wins do come in nice and fast, but they are never going to be too huge in size. Starburst is a perfect game to play if you have a smaller casino bankroll.

Starburst Slot is quite a high paced slot and some players might find it lacks innovation, or some of Netent's famed quirky features and extra game rounds. This is not a bad thing its just means that it's a classic slot which offers pure reel spinning for the extra wins. Starburst slot does offer the Starburst Wild feature, which gives you the opportunity to get some big winning combos.

Starburst Wilds: These helpful little icons appear only on the three middle reels (2, 3, and 4) whereby the Starburst Wild will expand to occupy an entire reel for more wins.

Wild Re-Spins: Being Netent, there of course is a twist: The Wild not only replaces all other symbols, but also grants a re-spin each time it appears as well. What’s more, if a Wild appears during a re-spin, it will expand and remain in place with any previously expanded Wilds for up to three re-spins (This is why they're called Stacked/sticky wilds). As you can imagine, this feature can create a lot of extra wins as a lot extra win lines are being created! 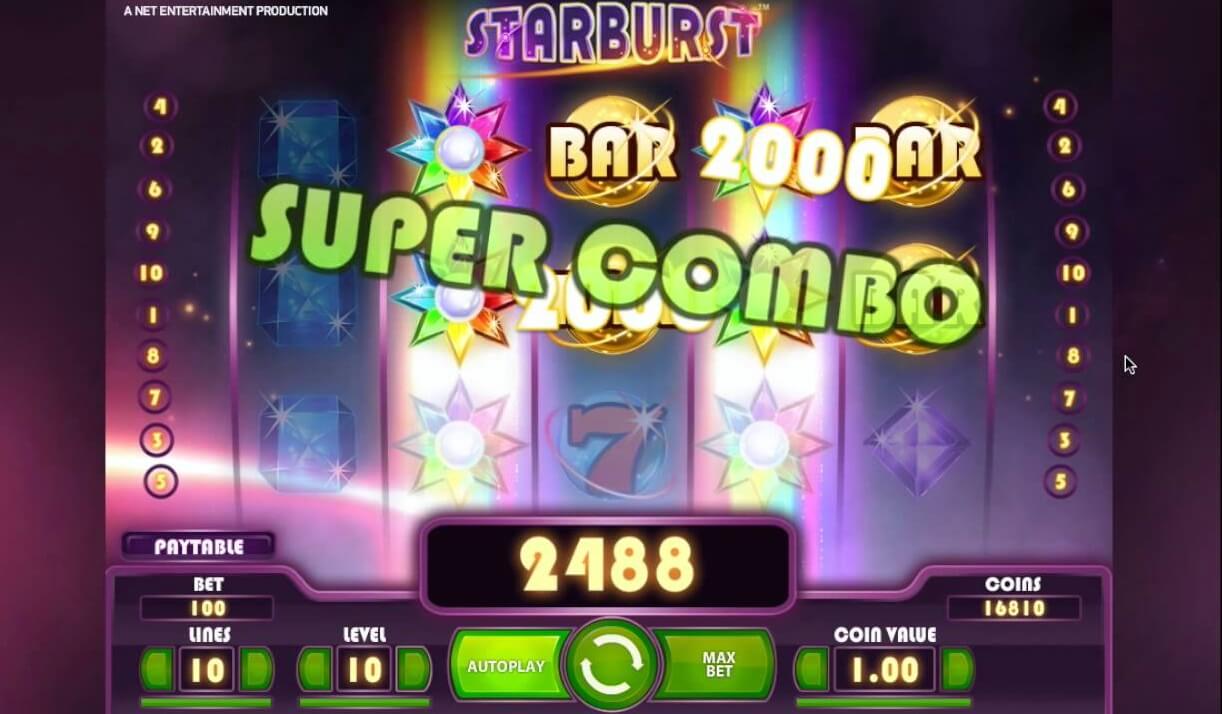 NetEnt adapted Starburst as one of the original slots to be made into a mobile friendly slot. That means Starburst can be enjoyed in Netents Touch edition, called Starburst Touch.

Starburst Touch has been specially adapted and designed to fit all mobile devices and tablets so you can enjoy Netent slots with no limitation, having the freedom to play where ever you want to. Starburst mobile slot works well and is responsive on all touch screens, and is easy to play as Netent designed it perfectly with larger buttons for smaller devices and it offers a great screen resolution!

Starburst Slot offers great visual graphics and some high paced playing. The Starburst Wilds will become your friend as they will help you win more. Some may find that Starburst Slot lacks some free spins rounds or eccentric features, but this is why we love to play Starburst. It’s simple, yet effective and it’s good to play these slots to keep your casino playing varied and fun.

Playable on both the main desktop version or on mobile, Starburst is popular for a reason and is highly recommended. Below are our most recommended Netent casinos to play Starburst at, each offering their own high value casino bonuses, some of which you can play Starburst for free.

Where To Play Starburst Slot